A young transient who said he was trying to shake zombies off a stolen semi-trailer truck he was driving caused a major freeway incident in southern California that sent four people to the hospital and tied up traffic for hours, the California Highway Patrol said.

Jerimiah Clyde Hartline, 19, was arrested in connection with the theft an 18-wheeler fully loaded with strawberries on Sunday near Temecula, according to the highway patrol.

Officer Nate Baer said Hartline had been riding with truck driver Daniel Martinez since his trip started in Tennessee after being kicked out of his home. When Martinez stopped to fill out paperwork at an inspection site, he left Hartline alone in the truck, Baer said. Hartline then jumped behind the wheel of the truck, sped off and soon after crashed into several vehicles on the freeway, Baer said.

Hartline was apparently under the influence of a substance that caused him to hallucinate, Baer said.

“He thought zombies were chasing him and clinging to the truck,” Baer said in an e-mail.

Hartline continued driving and hit a Ford Taurus and a Honda Accord, the highway patrol said. Two people in the Taurus were taken to area hospitals.

After colliding with the Taurus and Accord, the semi-trailer overturned. According to the San Diego Union Tribune, Hartline then jumped out of the truck and into a white van, demanding to be taken to another location. That driver held Hartline until authorities arrived.

Hartline has been charged with taking a vehicle without the owner’s consent and receiving known stolen property, court records said. 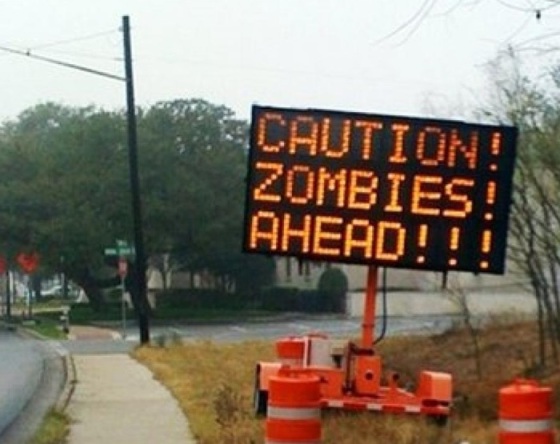