Posted by Tony Schaab on February 9, 2013 in Interviews

Recently, TheGOREScore.com had an opportunity to pick the brain of author Derek J. Goodman.  Below are the results – read on, if you dare!

AUTHOR BIO: Derek J. Goodman is the author of the novel “Machina” and the story collections “Machina” and “All Hell’s A-Buying Froztees.” When he’s not writing, he’s a librarian in Wisconsin.
DEREK ON FACBOOK: Facebook.com/derek.j.goodman
DEREK ON TWITTER: @derekjgoodman

THEGORESCORE.com: Please give us the best pseudo-online-dating-site introduction/overview of yourself.
DEREK: Hello, my name is Derek Goodman (“DJ” to my friends, “That guy” to my enemies).  I’m a Scorpio.  I like long walks through the library, which is a good thing since that’s where I work when I’m not writing.

THEGORESCORE.com: What exciting projects are you currently working on?
DEREK: I’m currently playing around with a couple of novel ideas that require a lot more research than I normally do.  One requires me to know how to survive in a mining colony on Mars that has been permanently cut off from Earth and the other requires me to know what the hell a fermion is.  Beyond that I’ve got at least three books I’m shopping around to various publishers, hoping that someone eventually reads them and decides that yes, they really did need to know all the explicit details about how a robot goes number two.

THEGORESCORE.com: Here it is, the $100 question: why are zombies so damn popular?
DEREK: I believe it’s because they are a blank slate.  They are humans, but they are stripped of anything that makes them special or unique.  You can than take that empty rotting corpse and project any fear you want onto them, making them a metaphor anything and everything you think is wrong with society.  Dawn of the Dead is the most famous example of this, with the zombies blatantly representing rampant consumerism.  And I don’t think it’s any coincidence that they started to resurge in popularity when everybody starting talking about terrorism.  They became this “other” that was coming to threaten the American way of life.  Even the recent spate of books with zombies as the protagonist, like “Warm Bodies” and “Raising Stony Mayhall,” were about our fear of intolerance.  And I think that as long as writers continue to find a way to make zombies represent new fears, zombies can remain popular.

THEGORESCORE.com: As a fellow writer, I’m always interested to hear other author’s best and worst rejection stories. Do you have one and/or the other that you’d like to share?
DEREK: As a writer starting out, they always tell you to start submitting your work at the top markets and then start working your way down.  So I sent the second story I ever wrote with the intention of publication to a well known horror magazine.  This was about thirteen years ago, and although I didn’t realize it at the time the editor was notorious for being very nasty to newbie writers.  I got a personalized rejection back that said “this story doesn’t have any point” and “your word processor is laboring under delusions.”  I’ve had other people give harsh criticisms, but no one else to this day actually stooped so low as to insult my computer itself.

THEGORESCORE.com: What are some well-done novels/anthologies/short stories/articles written by other authors that you’ve enjoyed recently?
DEREK: I recently read “Raising Stony Mayhall” because people were comparing my latest book, “The Reanimation of Edward Schuett,” to it.  Although they had similarities, I really think that “Raising Stony Mayhall” hit all the philosophical angles about zombies better than I did. I also, thanks to all the mainstream hoopla about her, discovered the work of Gillian Flynn.  I love how she’s not afraid to go to some really dark places with her fiction.  Her main characters are rarely likable people, but you go along with them for the ride anyway because you can’t look away from the horrible things going on around them.

THEGORESCORE.com: If you could write a tale about any object or character, fictional or real-life, and not have to worry about pesky things like copyright infringement, the truth, cold hard facts, or pretty much anything else that might get you sued, who/what would you write about, and why?
DEREK: As a Star Wars fan I have a longstanding dream that I can someday write a Star Wars novel.  Beyond that, I would love to write the two great Maxes of the eighties as a goofball buddy-cop story: Mad Max and Max Headroom.  Maybe I could just make Max Headroom be a figment of Mad Max’s imagination, sort of like a post-apocalyptic version of Harvey.

THEGORESCORE.com: What are some of the most challenging struggles you think writers face these days?
DEREK:  I think writing and publishing are still in a wild transitional period that started around fifteen or so years ago and hasn’t stopped since.  You had the shrinking publishing market start thanks to all the publishers buying each other up and forming these big conglomerates, the growing effects of social media, digital publishing, e-books, the death of the smaller booksellers followed by the slower death of bigger booksellers.  All these things are still going on and a new equilibrium still hasn’t been achieved.  So a lot of writers don’t know which way is up.  Some writers achieve great success through newer publishing means, others don’t.  Some can still get away with older ways of publishing, others don’t.  There’s no clear path anymore.  Writers have no choice but to keep trying everything until they finally find something that works.

THEGORESCORE.com: Do you have an all-time favorite book?  Movie?  Music album or band?  What makes this/them so special to you?
DEREK: I’m a giant fan of Stephen King.  He was the author that made me love reading and later showed me how to be a writer, since his book “On Writing” came out just when I was starting out and became my writing bible for years.

THEGORESCORE.com: Do you attend conventions or book signings/appearances?  Do you think these events hold value for authors to participate in, and why/why not?
DEREK: I do this whenever I can.  I don’t do them as often as I would like because of the expense, but for my personally I’ve found no better way to promote myself.  When I’m talking with someone I just met I find it’s easier to form even a simple connection when we can look each other in the eye and talk and joke and discuss books.  And I have never found a better way to network with writers and publishers.  Every single time I have gone to a convention to promote my work I’ve come away with some valuable new connection that has helped my work along.  I think every writer should do one once if they can afford it.

THEGORESCORE.com: This is a topic of great debate: do you listen to music when you write?  If so, what types/genres/artists do you find yourself gravitating to?
DEREK:  I used to all the time.  I found that heavy metal was the best writing for me, and Metallica’s S&M album was the absolute best for writing epic fight scenes.  As time has gone on, though, I find myself needing to write in silence more and more.  Maybe I’m just getting old.  Hopefully I’m still pretty far from telling other writers with the music-listening ways to get off my lawn.

THEGORESCORE.com: What do you think is one of the biggest mistakes that writers might make when they are first starting out?
DEREK:  Beware of the scammers.  They don’t look like scammers if you’re just starting out.  There are publishers out that they say they can help the next gen of writers to self publish, but they hit you with fees and payments that you didn’t even know could exist.  I know this from my own personal experience.  If/when you self-publish, always to your research and always be wary.  It may be a tired old piece of advice, but it’s worth keeping in mind even when self-publishing: money should flow toward the writer, not away.  If you’re not working with an established publisher or you’re working with some service, hire your own editors, cover artists, etc. If you’re working with a publisher, they should pay for everything.  If this isn’t the way it’s working for you, something is wrong.

THEGORESCORE.com: Do you have any particular quotes, serious or humorous, that have meaning to you or that you try and live by?
DEREK: I’ve got a binder where I keep all my magazine publications right alone with all my rejection letters.  On the cover I have this quote from Neil Gaiman: “It does help, to be a writer, to have the sort of crazed ego that doesn’t allow for failure. The best reaction to a rejection slip is a sort of wild-eyed madness, an evil grin, and sitting yourself in front of the keyboard muttering ‘Okay, you bastards. Try rejecting this!’ and then writing something so unbelievably brilliant that all other writers will disembowel themselves with their pens upon reading it, because there’s nothing left to write. Because the rejection slips will arrive. And, if the books are published, then you can pretty much guarantee that bad reviews will be as well. And you’ll need to learn how to shrug and keep going. Or you stop, and get a real job.”

THEGORESCORE.com: Is there anything else you’d like to share that we haven’t already discussed?
DEREK:  My novel “The Reanimation of Edward Schuett” is currently available from Permuted Press.  If you’re looking for something different in a zombie novel (multiple reviewers have called it a “zombie novel for people who don’t like zombie novels”) then please give it a go.

Because we are big fans of interactivity here on the site, we gave Derek the opportunity to “flip the switch” and interview TheGOREScore.com creator Tony Schaab with a few questions of Derek’s choosing:

DEREK: If you could be any type of tree at all, what the price of tea be in China?
TONY: Umm… 42.  Next question!

DEREK: Why does one drive on a parkway but park in a driveway?
TONY: For the same reasons, I suspect, that we call them “apartments” when they are so close together and you can drastically change the meaning and vocalization of the work “laughter” just by adding an “S” to the beginning of the word – because English is one, crazy, crazy language! 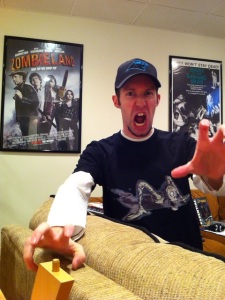 DEREK: Really, just how the heck do you pronounce your last name?
TONY: In the tradition of the greatest of last names that can be traced to German heritage, I’ve got a few letters that have no use and no business being in my last name.  The easiest way to tell you how to say it is to simply have you say it as sh-ah-b without any pauses while you say it.  I also tell people that it’s just like financial investment guru Charles Schwab, without the “w” and all the money.

← Could a zombie help you quit smoking?
Zombies Cause California Highway Chase →