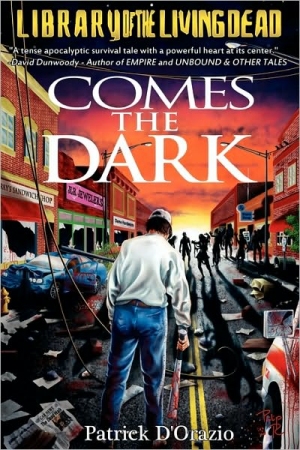 Being a horror critic that focuses specifically on zombie stories, I hear a lot of discussion from zombie fans about what they like and what they don’t like, and they generally tend to fall into two distinct categories. Many fans seem keen on seeing new types of zombies – fast-moving ones, thinking ones, even non-human ones. On the flip side, you have those die-hard undead enthusiasts who prefer their zombies as “The Godfather” George Romero made them: slow, shambling, unthinking and eerily menacing.

Generally, fans in the first category are able to find enjoyment in “classic” zombie stories as well as the “modern” ones, but many times it seems that fans in the second category tend to gravitate towards the “classic” version only and shun (or at least frown upon) the variety of “modern” stories. Fortunately for fans in both camps, there are authors out there like Patrick D’Orazio, who can reaffirm our belief that solid, entertaining stories in the “classic” style can still have a very fresh feel to them, as evidenced by D’Orazio’s excellent debut novel, “Comes the Dark.”