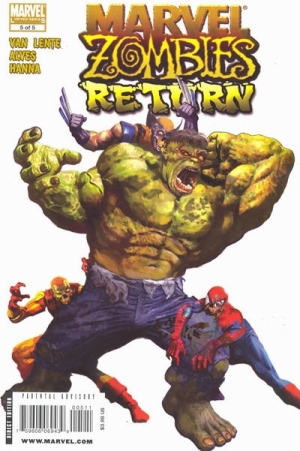 “Marvel Zombies Return” finally gives us a sense of closure for the story concerning the “original” Marvel Zombies. Marvel was also wise to bring in some experienced “zombie veteran” writers to each have their hand at writing an issue of this series:

Fred Van Lente, the writer for the “MZ3” and “MZ4” mini-series, provided the bookend first and fifth issues.

When we last saw these zombies at the end of “MZ2,” they were surprised by a small group of survivors and teleported off of their original home world of Earth, which they had decimated. The teleportation device used to surprise them had been reconstructed from its original form and the reader was never given an idea of who programmed it or where it was set to send the zombies.