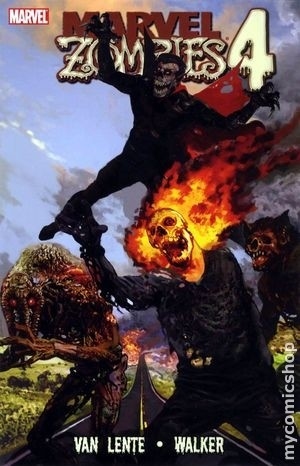 “Marvel Zombies 4” continues the downward shame spiral of Marvel pumping out another low-quality mini-series simply in an attempt to cash in on the popularity of both their previous “MZ’ series and the recent increase in public enjoyment of zombies in general.

The storyline for this series reads like two people were sitting in a room trying to trump each other by making each thing they said more fantastical than the last. I just spent 20 minutes trying many different ways to write a concise synopsis of the plot of this mini-series, and I have utterly failed to do so – the story is so convoluted and twisted that I, quite frankly, feel that it’s impossible to sum it up in a sentence or two. So I’m going to tell you the entire story in one long, run-on paragraph that I hope makes sense, since this is pretty much how the story is conveyed to the reader in the 4 issues of this series.