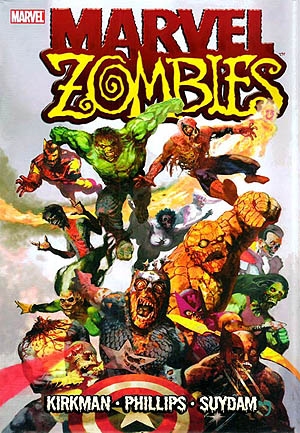 Even though “Dead Days” compiles the stories that came first from a chronological standpoint, this series is the true “mainstream” beginning of the MZ series. Picking up immediately where the “Dead Days” prequel story left off, this series tells the tale of how the zombie virus spread through this alternate-universe Earth, and it takes a lot of pages to show some really great aspects of superheroes and zombies mashed together: some heroes are reticent to attack and eat other, fearing they have lost too much of their humanity and their morals; some heroes realize that they can only think clearly when they are not hungry, so they engage freely in eating people when they have to; and some heroes just plain can’t fight the hunger and attack every living thing in their immediate vicinity.

Written by “the zombie guy” himself, Robert Kirkman of “The Walking Dead” fame, the first part of this story really tackles some pretty heavy issues and ideas of how super-powered beings might grapple with the moral and survivalist consequences of being undead with an insatiable hunger for flesh. It is well-written and well-drawn, and Kirkman really gets to show that he can write a good zombie story to fit pretty much any situation; whether it’s the gritty, reality-based world of “The Walking Dead” or dealing with reanimated versions of some of the world’s most beloved superheroes, Kirkman steps up to the challenge and absolutely delivers.