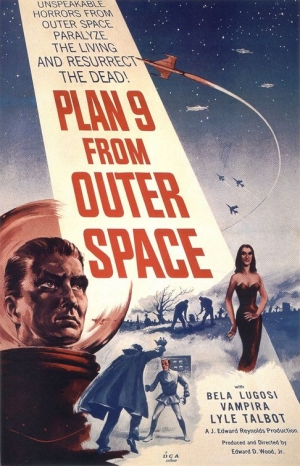 Earlier this week, I treated myself to a “double-dip” of two of the worst movies of all time, “Plan 9 from Outer Space” and “House of the Dead.” I sat down and watched these two movies on the same night, back-to-back, on purpose; “why would you do this to yourself?” you might ask me. I don’t know, honestly…I must have been really hating myself and full of self-loathing that day. It was pretty much a Sadistic Double Feature. Both of these movies were helmed by directors that are notorious in their own right, and many would say they are notorious for all the wrong reasons. Be that as it may, they both got their movies made (somehow) and released to the general public for their viewing displeasure, and now, having seen them and suffered through them, it is my solemn duty to report to you, dear readers, my sad, sad findings. Let’s begin.

There are a lot of bad movies out there. There are a lot of good movies, too, but use whatever cliché you’d like: you can’t score a touchdown on every play, even the best have their off days, you can’t make an omelet without breaking a few eggs, Tiger Woods doesn’t win every tournament he plays in…take your pick, the bottom line is that some movies are really good, some movies are average, and some movies are really bad. “Plan 9” is a movie that it’s director, Ed Wood, thought for sure would land in the “really good” category, but he was plagued with problems throughout the movie, including: a disastrous script that he refused to let anyone else re-write or add to; one of his “name” stars, Bela Lugosi, died during production of the movie, but Wood simply re-wrote the script to fit what scenes had already been shot; and he skimped on production costs, especially in the special effects and editing departments. The resulting movie is an amazingly accurate guide on the exact wrong way a movie should look, feel, and sound.