Posted by Tony Schaab on November 20, 2014 in Undead News

From The Wall Street Journal:

Actor Parker Wierling played the bit part known as “Asthma Boy” in AMC ’s “The Walking Dead,” uttering two lines in a single episode last year. He isn’t exactly Hollywood royalty, but on a recent Saturday he was signing autographs for his fans at $20 a pop.

Welcome to “Walker Stalker Con,” the convention for people obsessed with every detail of the hit cable TV drama, which centers on the fallout of a zombie apocalypse and kicked off its fifth season last month.

Yes, Trekkies have long had their conventions and now Walkers have theirs.

“The Walking Dead” has become a big draw at geek TV meet-ups around the country—from “Wizard World” to “Monster-Mania Con” to “Spooky Empire.” But “Walker Stalker Con,” which launched last year and has been held four times, is the only one that focuses exclusively on the “Dead.”

The latest edition of the event was held in Atlanta, about 30 miles from where the show is filmed. Some 35,000 ravenous fans staggered in over a weekend, waiting in lines for hours to see stars like Andrew Lincoln, who plays the ringleader of a band of survivors, and Norman Reedus, who plays bow-and-arrow-wielding Daryl Dixon.

They also feasted on C-list actors with tiny roles deemed important to the show’s subculture, like “Bicycle Girl”—who appeared only in the first episode—and “Michonne’s Pets,” the jawless and armless zombies who accompany one of the main characters. Actors signed photos of themselves and posed for selfies for anywhere from $20 to $80 apiece.

“They walk up and they know things about you—they’re dressed as you,” said Josh McDermitt, who plays a character who claimed to hold the key to stopping the zombie outbreak. “I have people getting tattoos of me on them.” One woman got a few lines of dialogue he uttered in Season 4 tattooed on her. “It is something I’ve never experienced before in my life,” he said.

Besides the signings, fans can get a zombie makeover for $10, or head over to the Nerf booth to take turns shooting foam bullets at a cutout of a “walker,” as zombies are known on the show. Vendors hawked paintings, including one that was half Mickey Mouse, half ghoul.

Walker Stalker Cons also feature onstage interviews with actors and panel discussions where experts chew over issues regarding the undead and the apocalypse. “We have great panels on zombie theology and economics—the real impact of it, if it really occurred,” says Eric Nordhoff, a Nashville music executive who got the convention off the ground with his friend and neighbor James Frazier, a former personal injury attorney.

AMC, the network behind “Breaking Bad” and “Mad Men,” sees the various conventions that feature “The Walking Dead,” none of which it sponsors, as evidence of the show’s broad appeal. It is the top-rated show on TV among adults ages 18 to 49, excluding sports and specials. The network works closely with Comic Con, the granddaddy of science-fiction and pop-culture conventions, to make actors available for panels and provide teaser video for coming seasons.

Smaller events have found themselves in AMC’s cross hairs from time to time. The network sparred with its talent and convention organizers after some actors were attending without permission and signing low-quality headshots that were printed off computers, people familiar with the matter say.

It wasn’t the end of the world, but AMC felt it had to crack down. The network says it now works with actors and their representatives to coordinate appearances and supplies photos for actors still on the show. (Mr. Nordhoff says Walker Stalker Con has always sought necessary approvals.)

Now, AMC is considering putting on its own big live event based around the show, people familiar with the situation say.

AMC’s licensing business barely had a pulse before “The Walking Dead” breathed life into it. The show has spawned a whole cottage industry of products, many on display at Walker Stalker Con—“Dead”-themed belts, dog tags, T-shirts, polar fleece robes and vinyl figures for little-known characters like “Tank Zombie.”

In terms of sheer fan hysteria, “The Walking Dead” is going where no TV show has gone before—at least since Star Trek, longtime followers of the sci-fi convention circuit say.

Fans have a range of explanations for the phenomenon—from the show’s sophisticated depiction of humanity to their love of gore. “I like murder mysteries or anything dealing with psychology, because that is what I want to major in,” said 16-year-old Katelynn Florig, her voice muffled by a zombie costume made of fake nails, liquid latex and toilet paper.

“I’m the scientist who accidentally broke the vial—it was kind of my fault the outbreak happened,” said Kenneth Lyles, 27, dressed in a bloody lab coat, zombie-eye contact lenses and gray face paint that made his jaw look like it was decaying.

Denise Crosby, who played the cult favorite “Tasha Yar” on “Star Trek: The Next Generation” and had a small part in Season 5 of “The Walking Dead,” said the obsessive enthusiasm of the Walker fan base reminds her of Trekkies. “This is staggering,” she said, while signing headshots for $40. “There are actors who want to be part of this show just to be part of all this,” she said. 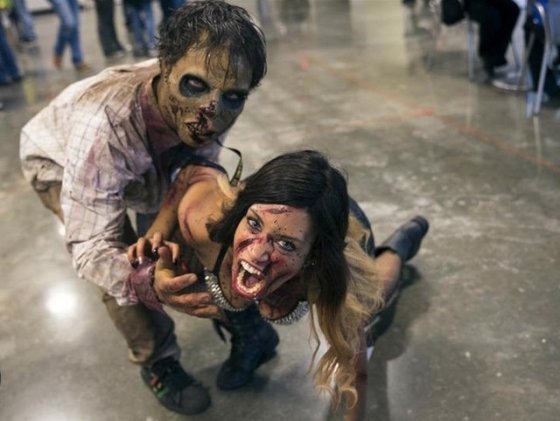 It is also a nice way to make some extra income for actors who aren’t the biggest stars on the show but enjoy loyal followings. Jose Cantillo, who played “Martinez,” a henchman who helped keep order in a small colony of survivors, has done 10 conventions this year, including appearances in Germany and London. He has had other roles, but the “Walking Dead” is different.

“That’s the one people recognize me from,” said Mr. Cantillo, who was “killed off” in Season 4. “I keep hoping that people will want Martinez at these things.” He charges $30 for autographs.

Naturally, it is harder for the actors who play zombies to get recognized. Moses Mosely, who plays one of Michonne’s pets, sat at his autograph-signing table when a woman wearing a T-shirt with him on it walked by. “Nice shirt!” he shouted. “This you?” she said. “Can you sign it?”

Mr. Wierling, 18, had been doing indie movies in Atlanta before getting called in for the role of “Asthma Boy.” Now, he is auditioning for network TV roles.

“It’s been a crazy experience,” he said. “People come up to me and know who I am and I’m like, really? How? It is cool.”