An Interview with “The Walking Dead’s” Glen Mazzara

Posted by Tony Schaab on February 5, 2013 in Undead News

From our friends at EW.com:

The midseason Walking Dead finale left us with many questions: Are the Dixon brothers done for? Has Rick lost his marbles? And how will new addition Tyrese fit into the equation? So with the show returning Sunday, Feb. 10 on AMC, we sought out showrunner Glen Mazzara (who will be leaving the drama after this season) for answers as to what to expect in the season’s last eight episodes. In the following Q&A, Mazzara promises a “major personal crisis” for Rick, a conflicted Daryl, and a vengeful Glenn. He also sheds some light on what we can expect from Tyrese, reveals another character from the comic will soon be making the leap from page to screen, and hints that there may be more death on the horizon.

ENTERTAINMENT WEEKLY: So when we last left off, Rick and company came into Woodbury and got Glenn and Maggie out. So I assume that’s it between them and the Governor. All water under the bridge, right?
GLEN MAZZARA: Yeah, I think they buy a house together. It’s very nice. And then they pick out curtains.

EW: What can you say about this brewing confrontation between the two sides?
MAZZARA: One of the things I’m excited about is we’re on the path for this showdown, and the Governor and Rick have still not seen each other as we went through those first eight episodes. They know about each other and each one realizes that the other guy can threaten everything that he has spent the past year building. And the Governor is certainly a big threat to Rick and can destroy his entire group, and the Governor sees Rick as a threat that can destroy all of his plans by showing that he was not the most powerful force in this world — that he was unable to protect Woodbury. Rick and Michonne and the group came in and sucker-punched him. So both guys now have a vendetta against each other.

EW: What’s Rick’s mental state right now? First he’s hearing imaginary phone calls and then he had the vision of Shane in the middle of a firefight.
MAZZARA: Rick’s mental state is very fragile at a time when the group needs him to be on his A-game. And he’s emotionally compromised. His sanity is questioned and this becomes a major personal crisis not only for Rick, but for his entire group. 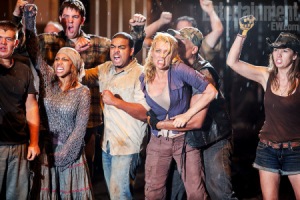 EW: We were left with this crazy cliffhanger of the Dixon brothers finally reunited under the worst possible circumstances. Assuming they somehow make it out of that alive, what can we expect with those two?
MAZZARA: Daryl has spent the last year with Rick and this group, and he has worked very hard to wrestle his past demons and to become a very, very valuable member of Rick’s band. So much so that we saw him step up as the number two after Lori’s death. He’s really the one who takes leadership of the group when Rick is lost in the tombs and the boiler room after Lori’s death. Now he’ll have to make choices after discovering that his brother is alive and his brother is on the opposing side. Daryl is caught in the middle and has to make choices. Can he try to bring everyone together, or does he pick a side, or does he have to go up against Rick in some way? I think it’s a very interesting arc. Norman Reedus is fantastic to work with and I think he’s got some pretty amazing work in the back half of the season.

EW: What is Michonne’s relationship to the group now? On one hand, she brought them supplies and then guided them to Woodbury. However, when they got there — as is her wont — she kind of took off and did her own thing.
MAZZARA: Of course Rick and his group would be suspicious of Michonne because she did use them to go back and seek revenge on the Governor. However, when she confronts Andrea in the midseason finale she realizes that her life has completely fallen apart — more so than she even realized. If she goes out on her own she’ll probably die alone out there, and for the first time we see that she’s vulnerable. So now she has to try to work her away back into Rick’s group and this is not a group that lets people in. So she has to both prove herself and face rejection at a time when she is emotionally vulnerable. Danai [Gurira] does a fantastic job of showing new layers to that character. When we meet Michonne, she’s just the tough badass. Now we’re gonna see what’s underneath that tough exterior.

EW: Glenn has some nasty cuts on his face after being beat up in Woodbury, but what about the psychological scars the Governor left on him?
MAZZARA: Glenn, who has always been a very resourceful wily character who has been invaluable to the group’s survival and has always been one of the smartest members of the group, is now blinded by rage and hatred of the Governor. He is now very much a hawk and will apply pressure to the entire group to finish the fight.

EW: Obviously fans of The Walking Dead comic were excited to see Tyrese introduced in the last episode. What’s going to happen when Rick returns and finds him there at the prison?
MAZZARA: Tyrese is not necessarily a good guy who simply joins Rick’s team and fights against the Governor. He’s a wild card. He’s an interesting character and his priority is keeping his own group safe. I think viewers will be surprised by the twists and turns in the Tyrese story.

EW: You brought in all this iconic stuff in the first half of the season: the prison, Woodbury, Michonne, the Governor, Penny, Tyrese. Anything or anyone else from the comic that we can anticipate seeing in the back half of the season?
MAZZARA: Our comic book fans will still be excited and delighted to see how the story unfolds and how we tell the story. We do have a lot of new surprising material. There’s still a major character to appear in the back half, which is very exciting. As always we take the comic book as inspiration and tell our own story. I’m happy to say the exciting pace and the chances we take with the storytelling and the twists and turns that people enjoyed so much in the first half are all still there in the second half. It’s one connected, fluid season — we just took a little break with for the holidays.

EW: What about any other new characters or groups not from the comic that we might be meeting?
MAZZARA: We have a lot of characters. Now it’s time to really push deeper into these characters and their motivations and their circumstances, and not continue to introduce a thousand new characters. Sometimes when TV shows do that it becomes difficult to track everybody and people don’t get enough screen time. Here, we’ve got more than enough story to tell and it’s a matter of really pushing in and making sure everybody has their moment, and that everybody we know and love gets to shine.

EW: You all were very upfront at the start of the season saying there would be some big deaths, and we certainly got those in episode 4 with Lori and T-Dog. What about in the final eight episodes?
MAZZARA: There will always be death in The Walking Dead, so I don’t think anybody should get comfortable. The Governor and Rick are gearing up for war, and without sounding silly, there will be blood.

← How Many Times Has the World Ended?
Could a zombie help you quit smoking? →