CBS’s Super Bowl broadcast will be invaded in parts of the country by characters from AMC’s hit zombie drama “The Walking Dead.”

No, the undead won’t rise to take a chomp out of CBS Sports announcer Jim Nantz. Nor is AMC paying CBS $3.7 million or more for 30 seconds of commercial time during the game. But at least one “Walking Dead” actor will appear in a short commercial during ad time allocated to local stations transmitting the CBS network feed — the latest in a series evoking hit cable programs such as “Homeland” to promote Time Warner Cable.

“We’re not a national footprint, so we’ve gone out and bought CBS spots in all our markets,” explained Jeffrey Hirsch, exec VP and CMO-residential services at Time Warner Cable, which is repeating a strategy it employed in 2012, when the Super Bowl was broadcast by NBC. “We’ve cobbled together a ‘national’ Super Bowl reach for our footprint.”

Can you call it a Super Bowl ad if it doesn’t reach the entire nation? For some marketers, the answer is “yes.” Each year, one or two advertisers buy up local ad inventory set to air during the Super Bowl in hopes of getting their message out to the exact same live-commercial-watching crowd that tuned in for game. In some cases, the purchase of a full national ad is cost-prohibitive; in others, the advertiser is blocked from the national broadcast for any number of reasons.

Time Warner Cable intends for its ad to run in 44 local markets, according to a company spokeswoman. The message is that subscriptions to Time Warner Cable — which makes shows including “The Walking Dead” available via cable, internet, video on demand and mobile devices — helps viewers enjoy TV any way they might wish, Mr. Hirsch said.

Although the company will use a top hit from cable to make its point on Super Bowl Sunday, Time Warner Cable has not received any pushback from any of the broadcast stations that is has approached, Mr. Hirsch said. The ads will have no tune-in information about the program, he added, and will focus on the benefits of subscribing to Time Warner Cable — which, of course, also distributes CBS and corporate sibling Showtime.

Other advertisers have used, or tried to use, local ad inventory during the Super Bowl in more controversial fashion. In 2001, Diageo worked around a CBS ban on hard-liquor advertising as well as Anheuser-Busch’s exclusive to advertise malt-based beverages in the game, snapping up so-called “spot” inventory from local stations airing the game to promote Smirnoff Ice. In 2009, NBC had to direct its owned-and-operated local stations not to accept a one-second ad for Miller High Life.

In this case, said Mr. Hirsch, Time Warner Cable’s ad purchase “was tied up in a larger buy, a spot buy with CBS,” which he called “very good partners of ours.”

In years past, broadcast networks may also have been more sensitive about rival cable outlets buying Super Bowl time — national or local — and using it to hype rival programming. CBS let Turner buy an ad for Tru TV in 2010 and NBC aired a spot for the History Channel in 2012.

Time Warner Cable’s Mr. Hirsch declined to specify which “Walking Dead” characters would appear in the new ads, which he said contained “original content.” Nor would he say whether zombies would rise in the scene. But some clues have surfaced in social media. On Twitter, actor Norman Reedus, who plays “Daryl” on the “The Walking Dead,” crowed about his participation in what he called a “Super Bowl commercial” — a sign that most people won’t distinguish between national and local Super Bowl commercials the way advertising aficionados do. 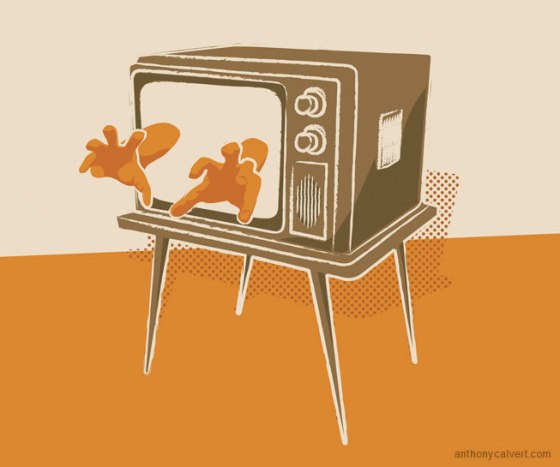