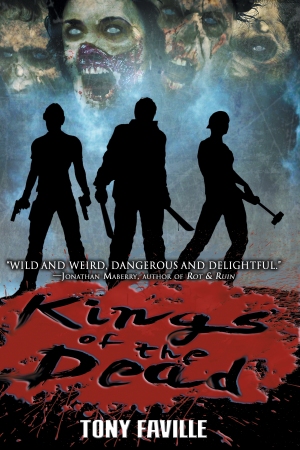 Cole Helman never seriously expected anything like a real zombie uprising, but became fascinated with idea of one: what would happen if the dead started to rise and attack?  So had been stockpiling supplies, first aid and weapons ever since he first saw George A. Romero’s now classic film “Dawn of the Dead”. It was just a game of sorts to him, a way to keep his skills sharp and to spend time with like-minded people.

One day, an epidemic of the swine flu begins killing people and mutating faster than the government can develop a vaccine. And one of those mutations manages to do the unthinkable: to trigger the dead back to life with a need to kill and to pass on the disease. In the aftermath, Cole finds himself the unexpected leader of a small group of survivors through the mountains and hills around Astoria, Oregon.

As the days pass, Cole keeps a diary of everything that went on, from the day-to-day life of finding shelter and making a home in the abandoned Fort Clatsop to battles with regular zombies and hyper-zombies that seem almost superhuman. But the zombies are the least Cole’s worries when members of their small group begin to disappear with no signs of struggle. Cole to realize that nowhere is safe, that he must get his much smaller group to safety, but finds himself in a battle against a neighborhood of cannibals.

That takes too much of a toll on Cole, and he wanders away from the other survivors, the weight of the past few months finally taking its toll on him. When he eventually returns, he finds Derek waiting for him while the other survivors had fled, leaving coordinates for an island in Alaska’s Inland Passage, just in case. However, instead of taking the easy way and heading up to Alaska, they commandeer some motorcycles and set out to the East, to see what’s happened to the rest of the country.

G: General Entertainment – Diary-styled books seem a very popular way to write a zombie story, but the difficulty is to keep the entries focused and in the point of view of the character doing the writing. Faville makes this seem easy as each of the entries from Cole maintain his style so that I began to understand and to feel everything along with him — which was no easy task, as I didn’t particularly like Cole in the beginning. But the more I read, the more engrossed I became with Cole and the small group of survivors struggling along with him. Another aspect of the diary-style that Faville employs is making it a travelogue. Cole isn’t restricted to the area around Astoria, but manages to provide a glimpse of the United States after the zombie uprising in a kind of “On the Road” format, passing through the empty landscape and meeting different groups of survivors along the way. 10/10

O: Original Content – Faville presents something new to the zombie genre that enhances what could have been your run of the mill zombie travel diary. Cole and Harley have a run in with what can only be described as hyper-zombies. A by-product of a failed attempt at a cure, these infected think, run fast, are incredibly strong, and any wounds heal quickly. Faville also uses cannibalism in a different way – not as a means for survival, but as something spiritually twisted – and subtly seeps it into the story so that you never see it coming. 9/10

R:  Realism – Cole knows his stuff when rattling off the names of guns. But not knowing much about guns myself, I would have preferred some description of the guns in addition to the name so I could understand when such names as AR-15 and Ruger 10-22 are being tossed about, just what gun was being used. He makes up for this with his descriptions of the area around Astoria, Oregon, which are detailed enough, from the location and appearance of Fort Clatsop to the nearest Walmart and specific neighborhoods, that I didn’t second-guess him. I never felt that the situations in which they found themselves ever strayed into the ridiculous. Everything felt plausible, from the cannibals to the townsfolk he runs across in Kansas. I will say, though, that I wasn’t sure why Cole and Derek didn’t head up to Alaska to meet with the group – family, if you will — that they’d been a part of for some many months. 8/10

E: Effects and Editing – The story provides just enough zombie goodness to keep any reader satisfied, and the descriptions of what the hyper-zombies can do is very effective. What I also liked about the story is that it takes place over a number of years so time and seasons pass, the world changes, the number and manner of zombies change, and nothing feels out of place. In regards to book format, I received the eBook version that includes two covers, and I prefer the first one with silhouettes of three armed characters standing on a hill with transparent zombie faces floating above them like clouds. (If only I had a Nook Color!). The second seemed to belong to a graphic novel, with only the silhouettes but no zombies. 10/10

Tony Faville’s “Kings of the Dead” isn’t all blood, guts and zombies filling every page. Other monsters inhabit this new landscape, sometimes more terrifying than any zombies. Faville uses this backdrop to tell the tale of a man struggling to adapt and to find his place in the new order of things. It’s effective and believable and great addition to the zombie genre.