G.O.R.E. Score: Faith and the Undead 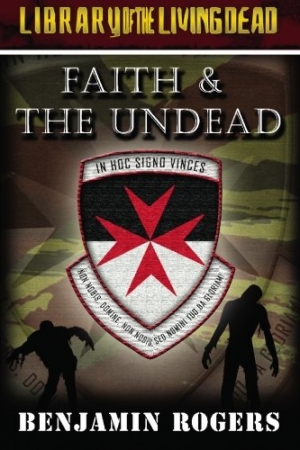 It can be a dangerous undertaking to mix religion with – well, with almost anything.  In fact, I know a lot of people and institutions that straight-up refuse to try and introduce anything even remotely religious into any other aspect of their business.  Does the phrase “separation of church and state” ring a bell to anyone?

So it was a welcome change of pace, then, when I saw Benjamin Rogers’ novel “Faith and the Undead” land in my lap.  Most of us are familiar with the iconic quote from George Romero’s Dawn of the Dead of “When there is no more room in Hell, the dead will walk the earth,” but other than a few passing references here and there, most zombie story creators don’t delve too deeply into the spiritual side of the undead.  Rogers tackles the subject head-on, and while the execution of the story-telling falters in some areas and the written results may be polarizing to some readers (based on their own personal faith and belief systems), I found it to be a very intriguing and unique take in a genre becoming more and more crowded with the “same old, same old” type of stories.

The main premise of the story is actually quite brilliant in its simplicity: Satan, feeling that he’s losing the war on Earth between good and evil, uses his powers to create a situation where evil people, after they die, reanimate as his own personal army of the living dead.  God, naturally, is none too pleased about this, so he calls upon some of his oldest and most devout followers: a secret group descended from the Knights Templar, who have been maintaining a ridiculously well-stocked and fortified estate in New England, called The Home.  The compound is currently inhabited by (apparently semi-)retired armed forces members, who are a myriad of nationalities and religions; once the undead start to attack en masse, The Home becomes the last bastion of resistance and the gathering point for helpless civilians.  Both God and Satan have big plans for the Brothers and the Sisters of The Home; the important question, as always, remains: who will triumph in the end?

Give us now our daily Score:

G: General Entertainment – While I found the beginning of the book a little exposition-heavy, once the action started rolling it never let up.  Military fans in particular should feel right at home with this story, as Rogers does a very good job of incorporating not only the equipment and language of the armed forces, but the underlying protocol and values those servicemen and women abide by.  The zombie action was good and – fortunately – the scenes with God and Satan were spread moderately throughout the book, so it didn’t feel that the reader was being beaten over the head with religious overtones. 8/10

O: Original Content – As mentioned previously, in a sea of stories about zombies, not many creators choose to tell their tale about the spiritual aspects, so for this alone I must give a high score here.  Rogers also makes sure that his characters talk in-depth about “faith” versus “religion,” so there are some moments of pretty deep “thinker” ideas rooted in the tale as well. 8/10

R: Realism – Let’s not mince words here: there are a decent amount of fantastical elements to even the most basic zombie story, and when you toss in God, Satan, and a National Treasure-esque secret society that’s hundreds of years old and still somehow a secret, something’s got to give in the reality department.  Overall, I think Rogers juggled all the narrative’s extraordinary elements fairly well, although I must admit I was surprised when the angels had to explain to God what was going on in a certain part of the story – I thought that dude was supposed to be omnipotent and all-knowing? 6/10

E: Effects and Editing – I’m not perfect with grammar, but I do expect a fairly high level of near-perfection in that area from books that are professionally-produced and have gone through what I can only assume are multiple edits by both the author and an editor (or editors).  “Faith and the Undead” is fairly solid in this department, but there are some nagging formatting and syntax issues that bring this category down somewhat.  Rogers and company also chose to employ an interesting approach to each chapter: they began every one with a quote or snippet of story that was out-of-context with what was going on in the rest of the chapter in question.  It’s an interesting thought, but after 37 chapters, I personally felt that the tactic became distracting and unnecessary.  There was even one chapter in the middle of the book that didn’t have the feature at all, which made it all the more of a head-scratcher to me. 5/10

The first part of a planned trilogy, “Faith and the Undead” is a very unique entrant into the zombie genre, but be forewarned: it’s heavy reliance of faith-based and spiritual plot points may be just as much a turn-off to some readers as it is a draw for others.  I was able to look past the editing issues because, in my opinion, Rogers has created a reading experience that can’t be found anywhere else in zombie fiction, and I’m looking forward to the next installment!

One comment on “G.O.R.E. Score: Faith and the Undead”