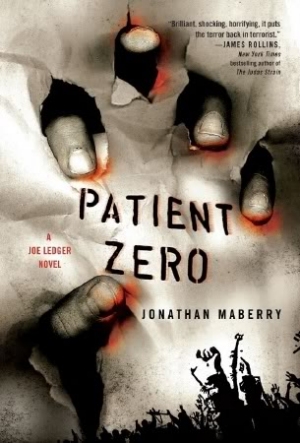 A lot of zombie novels in the stores these days present themselves as “standalone” stories; that is, they make it clear through the story-telling process that the story you are reading in that book is all the story you’re going to get, and the ending is so bleak and/or final that you know the author never wants to revisit this particular universe ever again.

Maybe it was just me, but I got the feeling right from the very first pages of “Patient Zero” that this book definitely was NOT going to fall into the aforementioned category.  The fictional star of the book, Joe Ledger, is a stereotypical badass – think of a cross between Star Trek’s Captain Kirk and Mission Impossible’s Ethan Hawke, with a dash of Marvel Comics’ The Punisher thrown in for good measure – but the man and the situations he gets into are so much fun, he easily becomes much more an enjoyable character instead of slipping into the realm of just another caricature.

In Jonathan Maberry’s “Patient Zero,” Ledger quickly transforms (at first rather unwillingly) from an uncompromising Baltimore detective to something much more when he is “recruited” by the FBI to lead a new, secret government agency called the Department of Military Science (DMS).  Ledger thinks he’s seen it all in his detective work, but he discovers that he is sorely mistaken: certain countries’ anti-U.S. sentiment has combined with overseas corporate capitalism to lead a group of terrorists into creating a new form of biological weapon.  This weapon, which effectively turns good folks into bloodthirsty zombies, will be unleashed on the unsuspecting American population.  In typical “save the world” fashion, it’s up to Ledger and the DMS to stop it all from going down.

G: General Entertainment – While it sports a lot of fun elements, the book itself draws heavily on a lot of established action/adventure tropes to establish the basis of the story: bad-ass cops and the impossibly-hot women they encounter, insane action scenes where the good guys emerge incredulously unscathed, biological weapons from the big-bad foreign threat, and the undead, of course.  The fact of the matter is, though, that Maberry has very effectively blended all these elements together in a rollicking, B-movie type of experience, and it’s damn near impossible for the average reader to do anything but just sit back and enjoy the ride. 8/10

O: Original Content – As mentioned above, the book does utilize elements of many different types of genre stories that have come before it.  However, I definitely give credit to Maberry for not only adding his own unique pieces where he could (namely, the singular character that Ledger becomes and the nuances of the top-secret DMS) but also the exceptional blending of the genres to create a great story.  When someone writes a tale of horror, action, suspense, thriller, and new-wave/techno stylings, that someone better have a great ability to successfully tell a story and keep the reader feeling like everything is fresh.  Fortunately, “Patient Zero” has that someone.  6/10

R: Realism – When you have a tale that mixes and matches so many fantastical pieces of the puzzle, the realistic boundaries obviously have to be taken with a slight grain of salt.  Most of the characters, from the DMS team members to the evil foreign terrorists to the model-level-hot token females (on both the good and the evil sides, me-ow), have more than a few moments of utter cliché.  Surprisingly, however, much of the technological and medical/biological aspects of “Patient Zero” felt relatively grounded in real-life.  Indeed, Maberry made sure to point out in his “Author’s Note” at the beginning of the book that he did a great amount of research and consultation with medical and tactical professionals to ensure that this aspect stayed as true to reality as possible.  It’s a welcome touch to such a fantastic story. 7/10

E: Effects and Editing – Clocking in at close to 420 pages, readers are definitely getting their money’s worth here, although the size and interior configuration might give a casual reader pause.  The story is broken up into a mind-bending 125 chapters, with some of them being as small as one paragraph, and the tale is capped off with a 5-point Epilogue to help set up the next book in the series, “The Dragon Factory.”  I personally really liked this unique set-up, but I could see how someone who isn’t an avid reader could get frustrated when they look up in the middle of the story and see that they were “only” on Chapter 80. 7/10 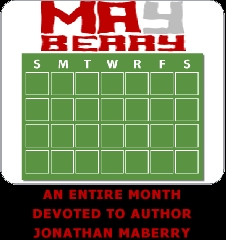 While “Patient Zero” may not be in all readers’ wheelhouses, it’s a tremendously enjoyable story from start to finish, and one that I definitely recommend to zombie fans who don’t mind a bit of “action movie” seeping into their undead tales.  With Maberry recently mentioning to me that he is putting the finishing touches on the fourth Joe Ledger novel, “Patient Zero” is a great foundation for what has clearly become a beloved storyline to fans, and one that is (fortunately) not going away anytime soon.