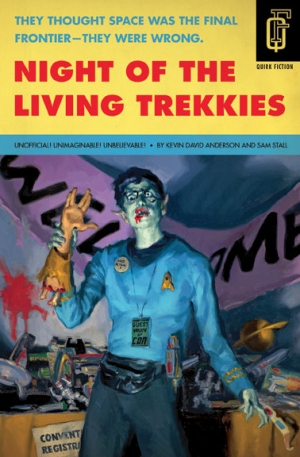 It was bound to happen sooner or later. That’s right, my friends…my worlds have officially collided, not once, but TWICE this year.

Readers who don’t know me personally may not realize that, before I became the zombie-enthralled connoisseur that I am today, I had another obsessive-level geek love: Star Trek. Now, I still have mad love for the Trek and definitely consider myself a Trekker (NOT a Trekkie) of a high degree. Those of you that keep up with my personal blog over at http://tonyschaab.com/opine-mine/ may recall that my zombie and Star Trek worlds struck together recently in real life: at the HorrorHound convention in Indianapolis last month, I had a chance to meet and chat with Jeffery Combs, star of both the “ReAnimator” series of zombie films and a longtime actor on both “Star Trek; Deep Space Nine” and “Star Trek: Enterprise.” After talking for a while, Jeffery called me a “true horror and sci-fi aficionado;” after I fainted and came back around, I decided the experience was, for me, the single-most greatest union of my two geekly loves of zombies and Star Trek.

Reading the recently-released book “Night of the Living Trekkies” by Kevin David Anderson and Sam Stall comes a close second. Hell, if I didn’t have this personal up-close experience with a star actor from both realms, this book would essentially be the culmination of the convergence of my two primary pop-culture phenomena.

I feel like I’m spouting long-winded sentences with big words much like the average Vulcan might, so let me back up here a bit and focus on the book itself. Anderson and Stall’s novel, released by Quirk Books (that’s right, the folks who brought you the “Pride and Prejudice and Zombies” series) is a unique blending of a tale surrounding an undead outbreak with the Star Trek universe. One important thing to note, however: the story contained in the book takes place here on Earth, and it sets the burgeoning zombie apocalypse against the backdrop of a Star Trek convention. It is NOT a tale set in the fictional world created by Star Trek, and this makes the tale infinitely more accessible to the zombie fan who is not intimately familiar with this fictional universe of starships, Klingons, and United Federations of Planets.

Avid G.O.R.E. Score readers will recall that I have reviewed a zombie book set in the universe of the “other” big sci-fi series, called “Star Wars: Death Troopers;” that story was set in the Star Wars universe, and in that review I recommended the book “if you are a fan of Star Wars and zombies;” I’m happy to report that “Night of the Living Trekkies” can be enjoyed as a standalone story by ANY zombie fan, and while pre-existing knowledge of the Star Trek universe is helpful in places, it is definitely not required.

Let’s beam on into the Score so you can find my logic “fascinating:”

G: General Entertainment – The story itself is a solid one. Set against the backdrop of a large Star Trek convention in Houston, a zombie outbreak with a very intriguing genesis (more on this below) leaves a group of convention-goers and hotel staff literally fighting for their lives. The combination of action scenes mixed with undead who sport some very interesting features is insanely effective. A unique addition: some of the folks, survivors and zombies alike, are convention-goers who were dressed in various costumes when the stuff hit the fan, and this adds an often-hilarious element that you won’t get in many other zombie novels. 9/10

O: Original Content – Mega-kudos to Anderson and Stall for crafting a singular zombie tale to go hand-in-hand with the one-of-a-kind setting of the Star Trek convention. It would have been very easy for the authors to rest on the Trek-centric element as the “okay, we’ve got our gimmick, we can phone in the rest and the book will still sell” approach, and I love that they went the extra mile with a very interesting and well-thought-out origin for their zombie plague. In order to stay spoiler-free here, I won’t go into details, but suffice it to say: no matter how many eyes you have, you’ve never seen zombies quite like these! 9/10

R: Realism – My only real complaint with the book lies in this category. And this could definitely be me, as a Star Trek fan, nit-picking here, so take this with a grain of salt (or a grain of quadrotriticale, for you Trek nerds reading this). Throughout the book we are told that the main character and hotel employee, Jim Pike, is a “former” Star Trek nerd who still retains all of the insanely-nuanced information about the series; indeed, he spends time in the story before the outbreak calling out convention-goers’ costumes and the like. But throughout the book, once other characters start making Trek-centric references and jokes, everything is always explained to Jim as if he knows nothing about the show, and he seems to take it all in stride. Yes, I know that this is done for the benefit of the reader who may not understand these references without being given the proper context, but it’s an unrealistic element within the scope of the story. Add to that the numerous Star Trek references and in-jokes designed specifically for the reader, which exist in the story but none of the characters ever seem to notice (the name of the hotel, the name of some characters, and even quotes by the characters directly from Star Trek episodes and movies themselves), and it just all sorta rubbed me the wrong way. Again, being a self-proclaimed “expert” in both the zombie and the Trek, this is probably a much more glaring issue to me than it is to the average reader. 5/10

E: Effects and Editing – The book itself is well-designed, with an entertaining (if not somewhat detached from the actual story) cover and fun sci-fi font-ing for the page numbers and chapter titles. At just a shade over 250 pages, the book moves along fairly smoothly and shouldn’t feel too drawn-out for any reader, regardless of your level of Trek knowledge. The titles of each chapter are also the titles of Star Trek episodes, which is clever; most are from the original Trek series that ran back in the 1960s, but some titles were taken from each of the other four live-action series (one chapter title was even taken from the title of the ninth Star Trek feature film). It is my duty as a Trekker, however, to point out two mistakes: Chapter 11, titled “Devil in the Dark,” is taken from an episode actually titled “The Devil in the Dark;” and Chapter 32, “Let That Be Their Final Battlefield,” is taken from an episode actually titled “Let That Be Your Final Battlefield.” God, I sound like such a nerd… 7/10

Another glowing report for another quality Quirk-released zombie story. This book is so cool, it’s even got its own hilarious movie-trailer-style promo video!  Whether you are a die-hard Trek fan, a casual follower of the series, or have never seen an episode, there is enough unique content and thrilling zombie mayhem to keep any reader entertained. One burning question I have about Star Trek zombies that was never address in the book, though: would the Vulcan Neck Pinch knock out a zombie? Hmm, you know what happens when a question like this is left unanswered in the “official” canon…let the geek debate begin!

2 comments on “G.O.R.E. Score: Night of the Living Trekkies”