G.O.R.E. Score: Dawn of the Dreadfuls 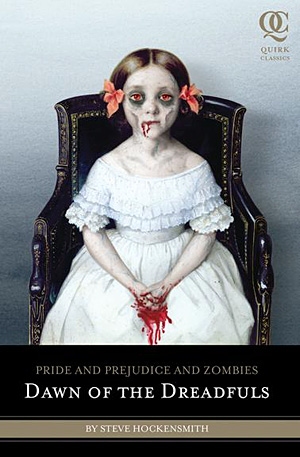 In a special feature here at The G.O.R.E. Score, we’re going to spend the next week reviewing a trio of undead books inspired by the works of Jane Austen. Called “Austen’s Autopsies,” the reviews will culminate in a review of the brand-spankin’-new book “Dreadfully Ever After,” to be released by Quirk Classics on the same day we will be reviewing it, Tuesday March 22! Let’s begin Part 2 of the Autopsy.

Some advance notice for folks who have read “Pride and Prejudice and Zombies” who are looking for the same experience duplicated in Steve Hockensmith’s prequel novel, “Dawn of the Dreadfuls:” you won’t find quite what you’re looking for here.

And that’s not necessarily a bad thing.

“Dawn of the Dreadfuls” is connected to the original Jane Austen/Seth Grahame-Smith mash-up in storyline and name only. The technical full title of this book is actually “Pride and Prejudice and Zombies: Dawn of the Dreadfuls,” in an attempt to make sure readers know the two are connected; far too long of a title for me to type in for the rest of the review, so “DotD” will do from here on out. The plot of this story also utilizes Austen’s classic characters and settings, with the universe slightly expanded to accommodate the prequel-nature of the tale.

Taking place half a decade before the events told in “P&P&Z,” the story opens with the re-appearance of the zombie plague, aka “The Troubles,” that has plagued this world for quite some time but was thought to have been eradicated. Mr. Bennet, father of main character Elizabeth and her four sisters, sees this opportunity as both his patriotic and fatherly duty to pass on his extensive knowledge of zombie-slaying to his daughters. Much to chagrin of his wife – who wants nothing more than to see her daughters happily (and wealthily) married so she can have the attention and good-mothering accolades she deserves – Bennet transforms the family greenhouse into a dojo and engages the instructional services of Japanese martial arts expert Master Hawksworth. Since the “P&P&Z” series would be nothing without a little high-society romance, Hawksworth soon finds himself vying for the affections of Elizabeth, competing against an odd contender in local scientist Dr. Keckilpenny, who believes his research could help domesticate the titular “dreadfuls.” Research is done, emotions are explored, the undead attack, and the story works itself to a satisfying conclusion that sets the stage nicely for the already-occurred transition into Austen’s altered account.

At the risk of sounding too “18th Century,” let us sojourn into yon Score so that I might enlighten thee further:

G: General Entertainment – I’m the first to admit that I was unsure how this story would work when I initially sat down to read it; creating a prequel story to an already-existing tale, especially one that is well-known, is a definite challenge, the results of which won’t always please everyone. Just ask George Lucas about his three “Star Wars” prequel films: it’s a tough assignment, because you have to bring the existing characters to a conclusion that is largely already foretold in the original story. It’s like working through a maze: you know where the end is, you just have to figure out how to get there within the confines of the puzzle. Fortunately, Hockensmith seems to have done his homework, not only utilizing the existing Austen characters very effectively (and managing to use plot devices in “DotD” to establish and explain some of the specific character traits they exhibit in “P&P&Z”) but also creating new characters and reasonably dispatching them within this self-contained plot. Well done. 8/10

O: Original Content – A split vote here. Since the main characters, locations, and general plot situation were all previously established, the opportunity for unique content was fairly minimal to begin with. However, Hockensmith does do a good job of not just expanding the “P&P&Z” storyline, but also elaborating on it, giving fans of this alternate universe even more to enjoy. The addition of the “scientific” aspects of the story, even if Keckilpenny and his captured zombie test subject “Mr. Smith” are a little Dr.-Logan-and-Bub-esque, is a nice supplement as well. So, we’ll meet in the middle area here. 6/10

R: Realism – Much like in Austen and Grahame-Smith’s tale, this story feels largely like it could be taking place in the then-contemporary moment. I don’t really have much else to say in this area that I didn’t cover previously in the “P&P&Z” review, so I’m going to give “DotD” an identical score for matching the relatively-reasonable feel. 7/10

E: Effects and Editing – Perhaps the biggest positive this book has going for it in relation to the previous novel is that “DotD” is written in a contemporary style and tone, instead of looking to re-create the “Olde English” style of Austen’s work in which Grahame-Smith also presented his writings. It made sense for Grahame-Smith to do so, as he was taking Austen’s existing literary work and adding to it; here, in a book that is its own entity, it would have been a dire mistake to try and replicate that style, so kudos to Hockensmith and Quirk for giving us a story that reads “normally” by current standards. Also appreciated is the attention to detail in the continuity of this book’s cover employing a similar style to that of “P&P&Z’s” cover, as well as the continued usage of stylized illustrations throughout the book’s pages. 8/10

While falling just short of a “must-read” status, it’s easy to see why “Dawn of the Dreadfuls” has earned a New York Times best-seller status: it’s a fun, easy-to-read tale that expands on the twisted version of Austen’s classic tale without taking anything away from what has come before it. Fans of “Pride and Prejudice” and “Pride and Prejudice and Zombies” should find much to enjoy here.

One comment on “G.O.R.E. Score: Dawn of the Dreadfuls”