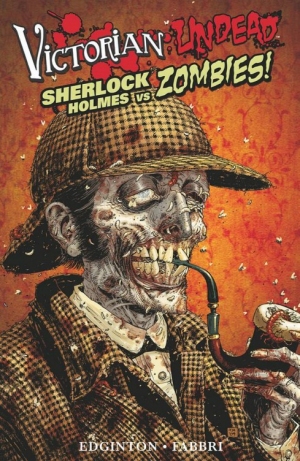 By now, we’re all familiar with the debate of if and how the zombie market is being flooded with content, particularly that of the “mash-ups” and crossovers that combine the undead with a variety of other characters and situations from already-existing cultural forums. Some folks are in the “no press is bad press” camp that believes that any new entry into the zombie market is good, because it helps to further spread the word about our favorite reanimated monsters. Other folks are staunchly opposed and even borderline-indignant to the fact that so many new zombie stories are being created so quickly, and they lament the fact that the market is now “watered down” as they pine for the glory days when zombies were a niche characterization and not a tool to be inserted wherever convenient.

Personally, I fall into a third group, situated in the middle of the two extreme factions mentioned above. While I do get REALLY pissed off when zombies are clearly used by someone as simply an “add-on” or a way to augment their product just enough to get zombie fans to buy it, I do applaud the increase in actual, well-constructed, zombie-centric stories, no matter how many folks want to try their hand at it these days. The ability for creators to construct their ideas for taking zombies and having them interact with new characters or putting the undead in unique situations is a distinct positive when done correctly, and on the whole there seem to be more “hits” than “misses” – or, at minimum, more items with at least some redeeming qualities than utterly-terrible schlock.