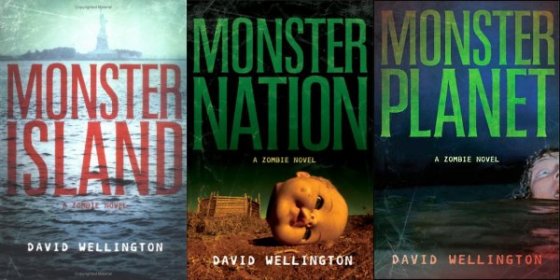 I wanted to reserve reviewing David Wellington’s trio of zombie books, Monster Island, Monster Nation, and Monster Planet, until I was able to complete reading all of three of them. Now that I have read the entire trilogy, I am glad I waited; even though these stories could exist independently of one another as stand-alone books for someone who hasn’t read all three (or even read them in order), they work together excellently as a complete three-act story arc.

Wellington has created an incredibly engaging story throughout these three books.  It’s very clear he understands the nuances of the zombie genre, but at the same time he works to re-invent and re-invigorate the zombie story by throwing in some very unique and very stylized concepts.  Heck, there is a scene in the third book, Monster Planet, where zombie mummies are shooting machine guns and rocket launchers out of a helicopter onto a caravan of super-powered intelligent zombies, and i as the reader never once questioned the scene or found it to be “implausible” in the context of his story.  Wellington effectively crafts vivid imagery and unique characters, both living and dead, that the reader truly and easily comes to care about.

My only major qualm with the books is the conclusion of the tale; I know it’s definitely a challenge to “wrap up” and put a finite end to a major story like this. With a tale of this scope, you definitely want to make sure you tie up all the loose ends and reconcile everything that has happened in over 800 pages of storyline, and while the ending is certainly broad in scope, it just felt out of sync with the story that Wellington had built up over the first two-and-a-half books. He did an excellent job of putting a definite end to this story but, like many writers, he felt he had to leave some things open-ended for a potential sequel story.

Leave a Reply to The Scofield Cancel reply